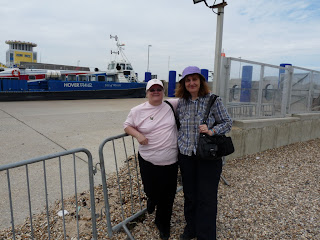 Had a great Birthday Geri & I went to Southsea for the day.

Did all the tourist things had Fish & Chips on the beach and watched the Hovercraft go to the Isle of Wight had a dabble on the slot Machines Had a Mr Whippy and then went and sat on the cliff top.

Finished the day by going on the pier and speaking to the men fishing there Then it happened!!!!

Was walking off the pier with Geri busy talking and went down the slope and there was a square cut out of the tarmac and i went my length face first but landed on my left shoulder and it came out of the socket i was in agony then out of nowwhere came two men off the pier we definately didnt see them on the pier two totaly different men One very smart man and one that i can only describe as looking rather like a tramp the tramp like one said to the other i had better take a look and he stooped down beside me put his hand on the top of my shoulder told me to move it back and forth and i could feel it slowly clicking back in to place he then slid his hand down my arm said it will be ok now stood up got his bag and went! me still sat on the ground well when i had recovered enough i stood up and remarkably i did not have not one mark to show of my horrendous fall not a scratch a bruise or nothing. And no sign of the man!

It was a certain WOW moment
Posted by Elizabeth at 00:18